Museum spaces are expansive and tastefully designed. Centrally heated spaces with high ceilings curated with historically significant, beautiful works of art and collectibles that allow for a culturally stimulated walk. What the church might have been to people before, the museum is today. With meticulous architecture, high ceilings, a collection of stained-glass windows, filled with magnificent artifacts the church was a place to gather and bond. Built to revere, museums, for the most part did not set out to engage with the visiting population, rather, to bestow upon them, knowledge and verdict on art and esthetics. Interaction was not important in this context. The purpose of art however has been to promulgate a point of view either unseen or shrouded. Therein lied the dichotomy in the purpose of a museum housing art. To remain revered and profitable is a tall order!

During my recent visit to the Barnes Foundation in Philadelphia, I revisited a thought I had a few years ago at Tate Modern. Richard Tuttle’s giant fabric installation hung in the gaping foyer at Tate Modern while little kids ran around in the rest of the floor space – the four expansive walls were totally empty.  There was a gross underutilization of interior space, given that there are so many living artists who are willing to cook and serve up their own body parts just to be seen and heard! Perhaps museums should consider including a few up-and-coming artists to let them have their fifteen minutes?! Even the oddest performance art will elicit a degree of curious viewership. Same with the outdoor space at the Barnes Foundation, it was beautiful and completely empty! Filling up these spaces to some extent, might make a big difference in art and commerce related to museums. What must be mentioned about Barnes however is that the museum has made a paperless visit informative with the option to revisit at leisure if desired. Each work of art can be focused upon with a smart phone camera yielding topical information. Later, the visitor gets details about all works seen at the museum in her inbox, making the visit meaningful and lasting.

“All art is quite useless” – Oscar Wilde

My work has been at the National Liberty Museum, Philadelphia since last October where it will remain mostly behind closed doors until May this year. The museum had to close its doors to the public due to the pandemic soon after the opening. It is perhaps needless to mention that the turnout was low, aside from a few socially distanced visitors, most of whom were participating artists and their supporting friends and family. With a jam-packed basement and storage full of artwork at home, there is barely any room to store the sculpture when the exhibition ends. I am considering bringing the sculpture to a city park when the exhibition ends, to see how people react to it, when they realize it is unattached to its surroundings. Will they simply walk away, bring it with them, or kick it to a corner? It might be fun to catch it on hidden camera! A test of human reaction to unguarded art. Creativity is invaluable, there must be a better application for it.

Growing up, my parents brought my siblings and me to archeological and art museums. We were encouraged to read the plaques and speak in indoor voices. My very first museum, was the Indian Museum in Kolkata, my birth city. It is the ninth oldest museum in the world! I was most intrigued by  the Egyptian mummy. Ever since I have seen mummies in various states of wrappings and encasing at the Museum of Natural History, NYC, and the British Museum, London, but my love for the macabre was lovingly instilled since childhood! I recall bringing my children to the “Discovery Room” at the Museum of Natural History for some hands-on science. Following cues of touch in the museum space, Monmouth Museum in NJ, a space for families, held an exhibition titled, “Please Touch” that encouraged visitors to touch and feel the art on display. For the first time I worked with aluminum, etching ink and balloons, and altered my mindset so as not to stay too attached to my work.

Why do we have to pay to visit a museum in the United States and not anywhere in Europe?

Upon returning from a relatively recent visit to the spectacular Frank Gehry designed Guggenheim museum at Bilbao, I visited Guggenheim in Manhattan with the hope of connecting with some of the names in my, should I say, industry? The Guggenheim building by the Nervión had the most spectacular grounds! Louis Bourgeois’ giant spider and Jeff Koon’s flower garden “Puppy” adorned it’s outdoor spaces. The interior space had unexpected elevations and curves! Back in Guggenheim, Manhattan,  Zarina Hashmi was showing. Not only did I have to stand in a long line to buy tickets that cost all of $25, as opposed to free entry at Bilbao Guggenheim, the industry powers that be would not exchange a single word with someone like me – essentially a persona non grata in the strictly taxonomic hierarchy of the Indian Art scene! Why do we have to pay to visit a museum in the United States and not anywhere in Europe?

On the topic of expense, cost of shipping is often the artist’s own responsibility for small fries like me. My works that exhibited at the Royal Scottish Academy are still at a dear friend’s basement in Northampton, UK. The return postage on the works to the United States was quite prohibitive including insurance. Having to pay for shipping might sound mild in comparison to a request made by MADRE-museo di arte contemporanea Donnaregina in Napoli, Italy, for some or all of the works in my Death of an Icon series, as donation. What is more astonishing is that I was almost willing to go with the plan if only shipping was provided! Innovation has always been the stronghold of gallery and museum directors. The director at CICA contemporary art museum at Seoul, a graduate of UPenn, managed to put up a rather engaging event with informative discussions with young artist invitees   on the topic of my solo exhibition. Some small and medium works were installed with large scale projection of works that were too expensive to haul.

In a socially distanced world, museums can perform a crucial function of bringing thoughts and esthetics into a brick-and-mortar space outside the confines of Instagram and Tictoc. Video graphic projection to avoid cumbersome transportation of large artworks is already in practice. For museum goers, the synthesis of new ideas through intellectual exchange is as important, as is the need to have an esthetically pleasing space to visit for entertainment and learning. Weather it is the Musée d’Orsay or Ripley’s bizarre events, what goes on within any walled destination determines if people would want to spend time there. Inclusion of living artists might be nice, even profitable, just like the inclusion of female artists on an entire wing of Musée d’Orsay. It has even been attempted to bring Sistine Chapel to Oculus at the WTC. Art and people should be brought together like the proverbial mountain and Muhammad, wherever there is an opportunity. The value of such an exercise will reveal itself through experimentations with spaces, inside and out of Museums. 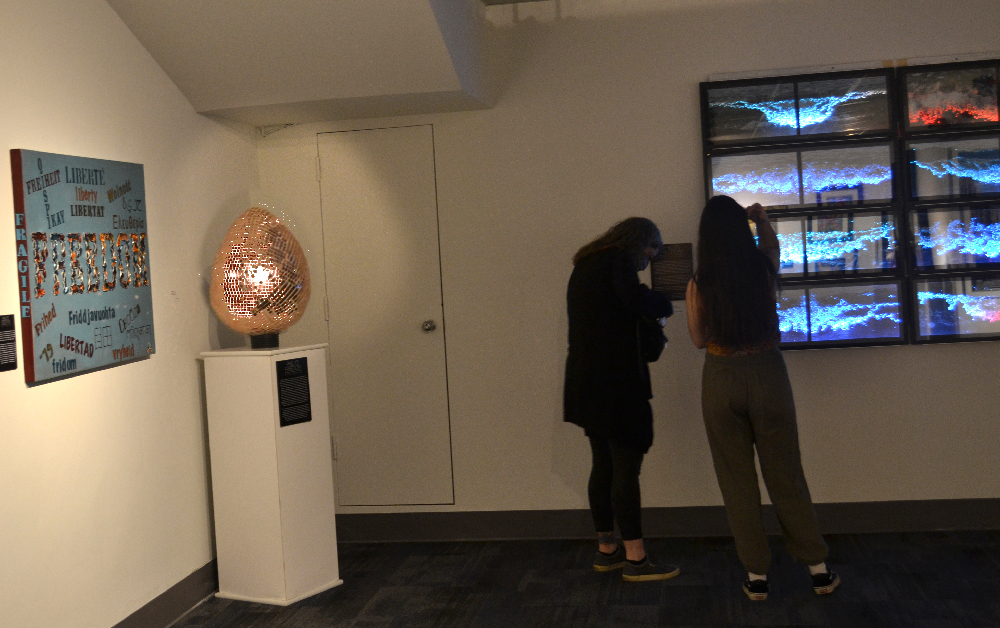 The giant mosaiced egg reflects much like a disco ball the light that hits its surface. Light – being information that is yet to consolidate…