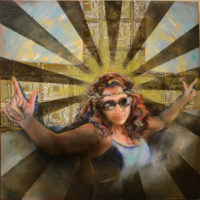 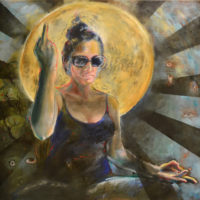 “Aham Bramhasi” literally translates to “I am God” – an utterance used to explain the unity of macrocosm and microcosm – a state attainable only when the ego is overcome. These works revisit a state of understanding with a new lens, a playful transgression that questions the validity of the belief system in place as it alludes to the polarity evident in race, gender, politics and religion worldwide. These portraits gesture and redefine a new normal that is already in motion. To put it in the words of esteemed scholar Paulo Saffo, “Throw in the usual round of human misery served up by war, revolution and natural disasters, and the result is a potent cultural Petri dish from which a new god could spring.”